Vote for $$$ for Historical Preservation and Restoration


Vote for Rossville AME at www.partnersinpreservation.com to get this nationally important church grant dollars. Part of Historic Sandy Ground, this church was built in 1897.

If you don't want to vote for a South Shore site, vote for Our Lady of Mount Carmel Shrine over in Rosebank.  These two sites are small, underfunded and not on the radar for the big bucks like some of the more well known institutional sites on the Island.  Any help they can get will, I imagine, be greatly appreciated.

So passes the last of the Band's trio of vocalists (Richard Manuel in 1986 and Rick Danko in 1999) and the only American in such an American sounding and rooted group.  The Band is one of greatest artifacts from the sixties and produced some of the best music in that era and which stands up under the weight of time and changing tastes much better than so many more fashionable artists' work.  Taking from the pre-rock and roll sounds of America such as folk, country, blues and blue grass as well as early popular music, they embedded it in rock and made it even better.  I may never need to hear "The Weight", "Up On Cripple Creek" or "The Night They Drove Old Dixie Down" again, but to miss out on "Ophelia", "Chest Fever", "King Harvest" and so many others would be painful.

The commercial heart of Stapleton is always assumed to be located at Canal and Water Streets along Tappen Park.  Well that's probably accurate it neglects the stores that ran from Wright Street all the way up Broad Street to Van Duzer Street.  According to my map reading skills that's about 1/2 a mile.  Add to that Broad Street from Bay to Tompkins and you get another 1/4 of a mile.  There half of the latter was pretty much residential, but still, that's about a mile's worth of stores catering to the needs and desires of Stapleton's citizens.  Once you add in the Tappen Park surrounds and Bay Street, Stapleton probably had at least as much commercial property as Port Richmond did.  Now much is gone or pretty low rent stuff.  So it goes. 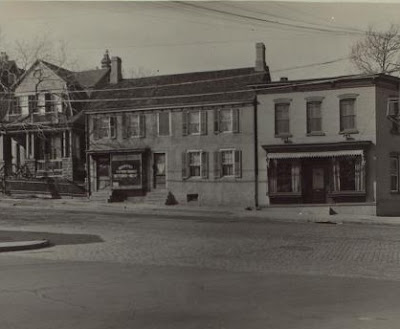 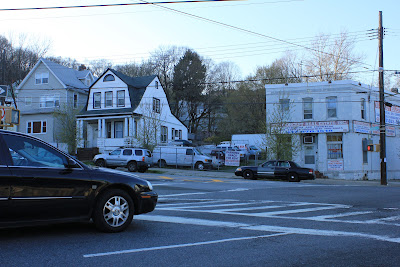 When I was a kid the building on the left housed a canine patrol.  Its logo was a snarling dog's head.  My sister's dance school was originally in the same building on the Targee Street side.  It was called "Charing's Dance School" (or something very similar) 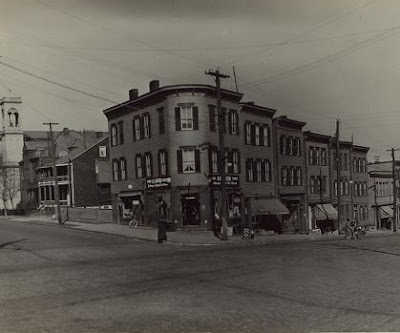 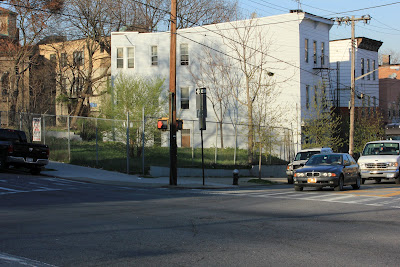 Same corner today - It was an empty lot even when I was a kid in the mid seventies - I remember doing a cleanup of it when I was in the Weblos or Boy Scouts which would have been around 1977. 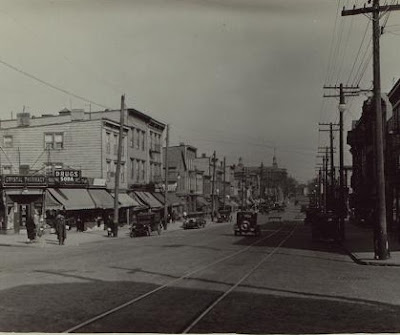 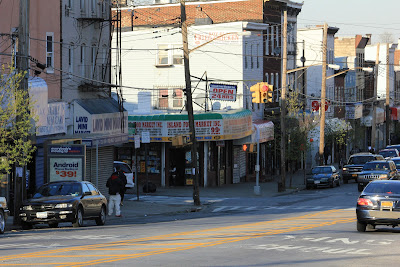 Today - the corner store was candy store with a soda fountain when I was kid.  I only went once or twice but my mom and sister went there a bunch when she went to dance classes. 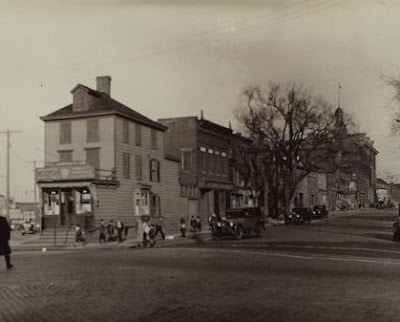 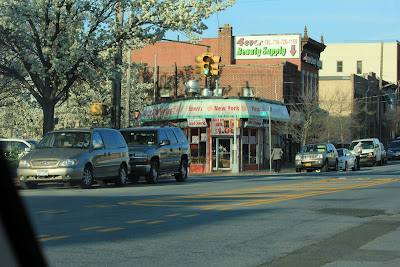 Today - Back in the early nineties the pizzeria (and as long as I can remember the building in the foreground has housed one) was called "Two Crusts".  I don't get why but it did make us laugh when we ordered and they picked up the phone and said it. 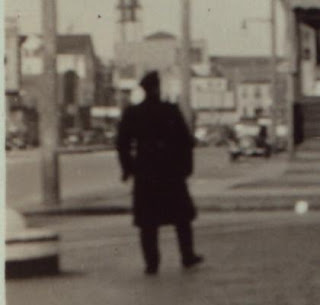 Stapleton: Part One - Remembering and Ranting

For over thirty years Stapleton was my home.  For all sorts of reasons my life revolved around the neighborhood.  My mom would go shopping in Stapleton every week and we'd eat lunch at the Woolworth's luncheon counter.  I went to the late school at Trinity Lutheran and my first on-the-books job was at the Stapleton Public Library.
My mother was intimately involved in trying to stave off the ultimate decline of Stapleton through a variety of community groups.  She helped found something called the Friends of Stapleton Library but in the end the use of volunteers was limited by the employees union.  Then she and the late Helen Pose, among others, invigorated the Stapleton Civic Association.  That led to large, annual  festivals and flea markets around Tappen Park.
Finally she launched the Stapleton LDC and was its first director.  With a staff of three the LDC operated out of Stapleton Village Hall and secured grants for development and struggled to work with the merchants to preserve and encourage commerce in the town.  They got the Village Hall refurbished and the gazebo and brick work installed.
All through this period there were lots people taking chances on businesses (ex. Cana's on Broad Street) and buying old homes and renovating them.  People like Addison Branch and Cynthia Mailman reminded people of the beauty of Stapleton's architecture.  Mud Lane was launched in 1977.  The great and definitely not late Norma Herz (superstar children's librarian) brought Peter Seger and the Clearwater to the town on regular visits.  There really seemed like some sort of renaissance was happening.
In the end it all sort of came to nothing.  Over time the older businesses vanished (think John's Bargain Store, Store of A Million Items, the Army & Navy Stores, etc.) and the new didn't last or were more low end.  The SI Mall helped drive a stake through the heart of Stapleton's shopping district just as it did Port Richmond's.  But I think the greatest blow to Stapleton was its turning from a working and middle class neighborhood to a disproportionately poor one.
I just read the Mud Lane Society's history of the decline of Stapleton and it's a fascinating bit of myopia.  They make it sound like only the blind eye of bad business killed Stapleton.  They claim, though vacant for 13 years, the Piels Brewery could have been turned to some sort of "adaptive reuse" without providing any examples.  They claim the Homeport only brought bars without noting that the base never became fully operational and filled with staff and families housed in nearby neighborhoods. High taxes, weak policing and changing economic demographics weren't the culprits according to them, or at least don't merit a mention.
Most importantly they never comment on the Stapleton Housing Projects.  Once the City decided to focus on housing for welfare recipients instead of working class and municipal workers Stapleton started on a downward spiral it's never recovered from.  Yes, many of the white residents fled because of the appearance of black residents.  There's no denying the racism contained in white flight (if you read the SILIVE forums about Stapleton and took a shot at every racist comment regarding how great the neighborhood was you'd kill yourself) but it also holds an element of opposition to one's neighborhood being suddenly changed by influences out of your control.  The economic circumstances are different, surely, but look at the reaction of long time residents in Harlem and Bushwick to gentrification.
Still, the problem with housing projects is that they lock an area into a permanent economic stratum.  If you deliberately choose to make it the lowest economic one then there's going to be an effect.  It's the government saying "This will now be a poor neighborhood forever". 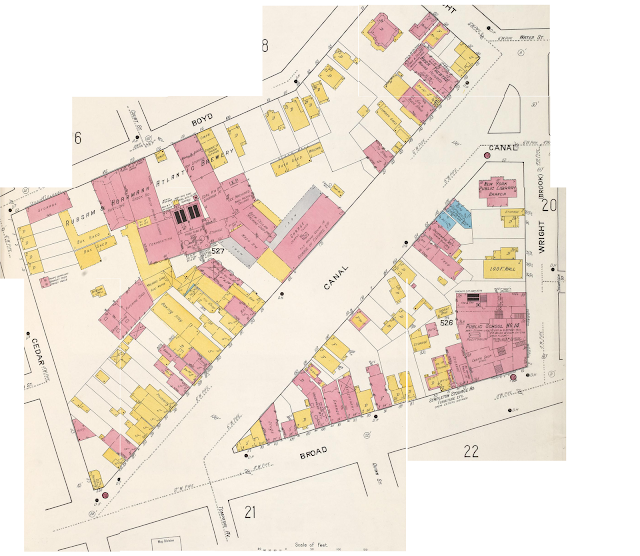 The block bounded by Canal, Cedar, Boyd and Wright - 1917

As the middle-class consumer base that existed for the stores that ran from the top of Broad Street and Van Duzer all the way to Bay Street, along Bay and up Canal and Water Streets shrank the businesses suffered.  In the eighties and early nineties drugs and crime helped kill off many that had straggled on by scaring away customers.  Do you remember the last time you chose to go to the late Gelgisser's Hardware or Miller Drugs?
Today crime is a much decreased part life in Stapleton (thanks to Giuliani, Bratton and Bloomberg).  Even though Woolworth's closed in 1997 (I think), the building has been occupied by the OZ Clothing since about the same time.  Other shops appear to be thriving.  Security helps lead to economic stability which leads to permanence.  Maybe the businesses on Broad Street and along Tappen Park will remain.  Maybe future Staten Islanders will be willing to continue taking a risk on Stapleton.  Still, it's not enough and old commercial and residential buildings will continue to rot away. 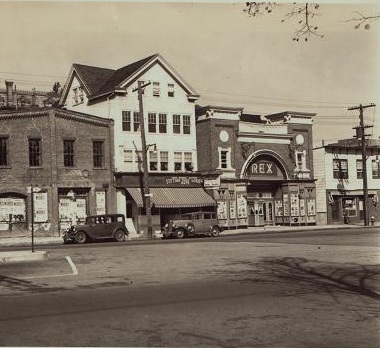 Right to Left - The Rex Theater and neighboring buildings - 1936 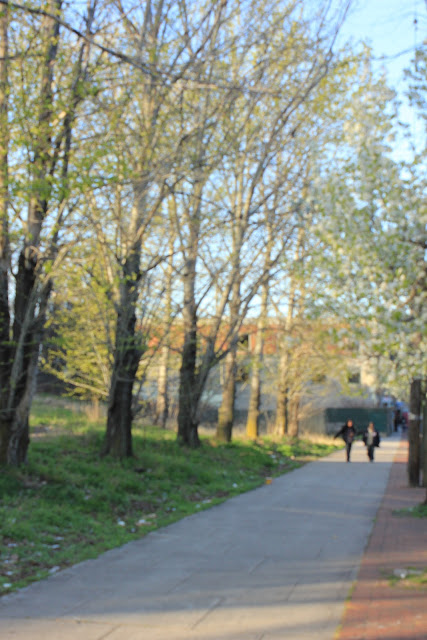 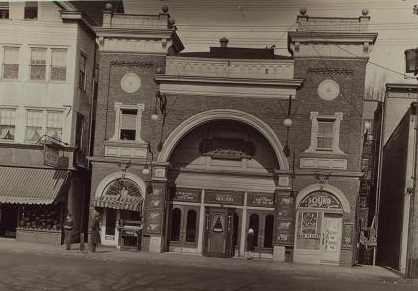 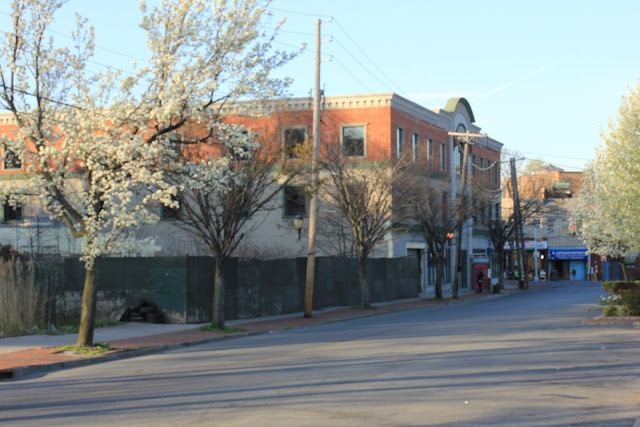 Intrepid Development's refurbishing of the old Ross Cosmetics building (I can't remember what was in it before except for Golden Cue Pool Hall {and does anyone have a picture of their old advertisment?} and Wright Toy & Hobby used to be in the back) 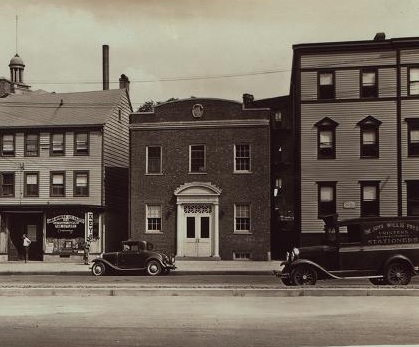 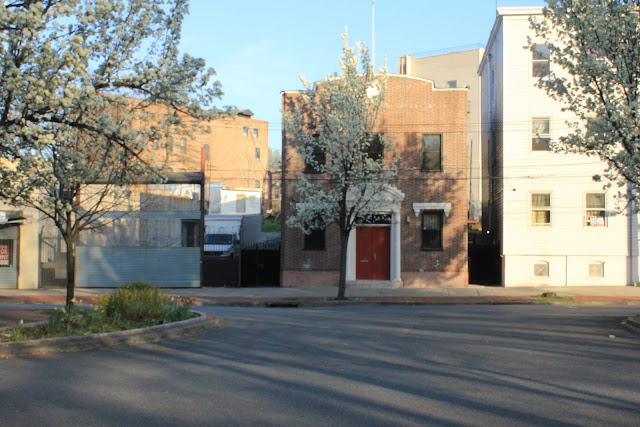 Same as above - today 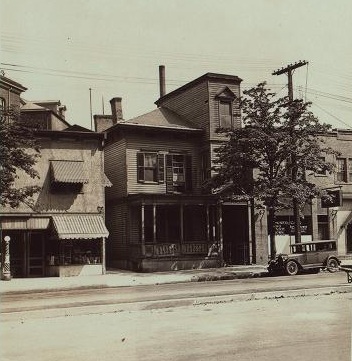 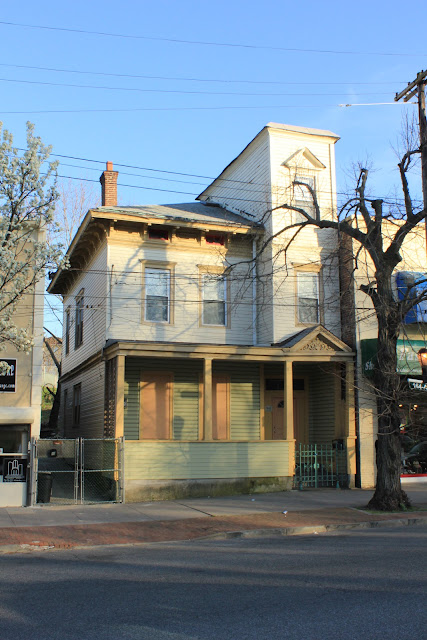 160 Canal Street - today - this wonderfully odd house still stands though, mysteriously, the first floor windows in the front are boarded over. 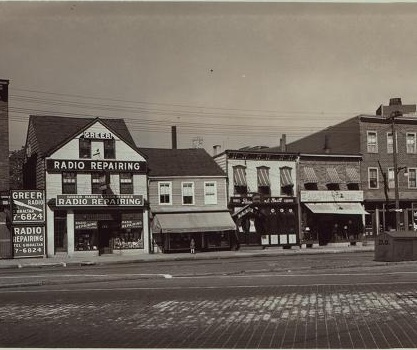 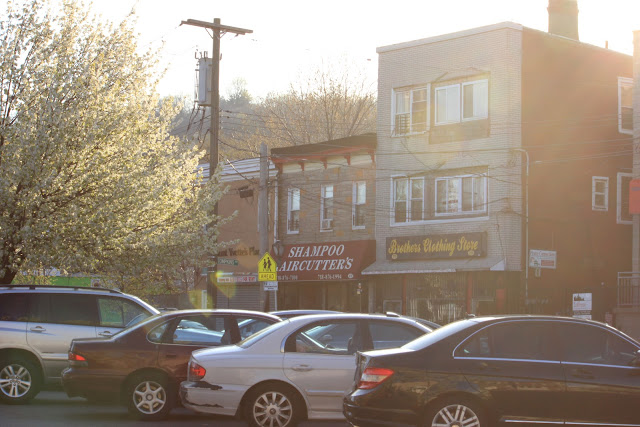 215, 217, 219 Canal Street - today - all that remains of the commercial properties that once ranged from Wright Street to Cedar Street on the west side of Canal.  The radio shop on  the left of the old picture was only recently demolished. 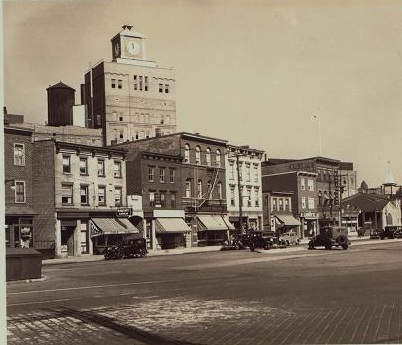 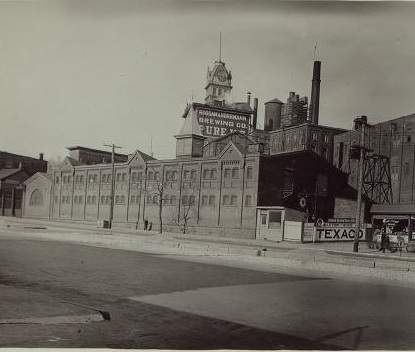 Finally, the centerpiece of the block - The Rubsam & Horrmann Atlantic Brewery.  I'm not sure when it was built though a decent portion of the plant is shown on the 1874 map of the area (below). 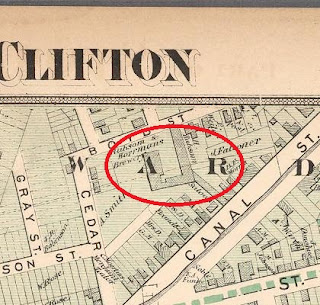 The top picture (1936) was taken from where Broad and Canal meet looking north toward Wright Street.  At the far right you can make out the building in the lower picture (1930) which the maps designates a garage and storage facility.  That clock tower forms such a part of my childhood memory.  My buddy, Mike G., claimed his older friends had actually climbed up inside of it.  Before I got my chance, and based on later exploits I definitely would have tried, it was gone.  It was torn down in 1976 when I was ten.  Later the city helped build housing much of the site and a park was created on the denuded stretch of Canal Street.  It looked derelict then and only more so now. 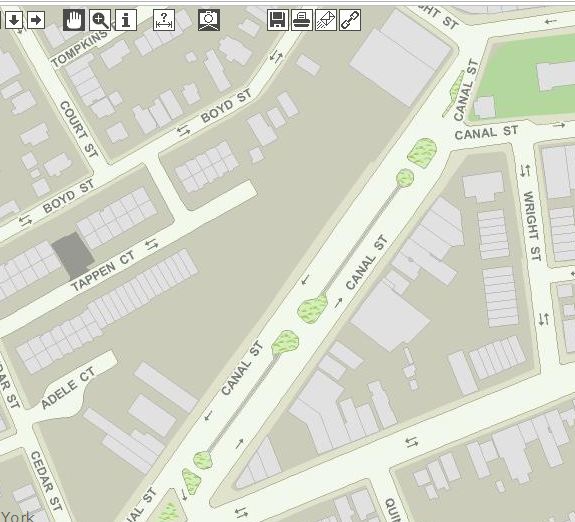 Canal, Cedar, Boyd and Wright - 2012 - look at the transformation and desolation of the once vibrant commercial and industrial block.