In 1930, William T. Davis and Charles W. Leng, co-founders of the Staten Island Institute of Arts & Sciences, published their five volume "Staten Island and Its People: A History 1609-1929".  For anyone interested in the past of this borough this is an incredibly important work.  Until now I've been forced to copy notes out of the library copies at CSI.  My ability to simply leaf through to my heart's content has been limited at best.
Last year I went to an estate sale in hopes of buying a set but was confronted by a price that was above my limits.  Now, however, a more attainable set has appeared on my horizons.  At present they are being prepared to wing their way down from the Great White North (well, at least Nova Scotia) into my living room and onto my bookshelves.  To say I'm excited is way too much of an understatement. 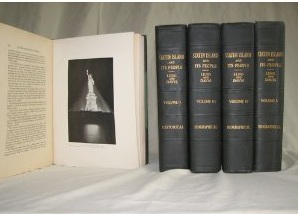 I hope it means a return to regular posting for this site.  I've hit a bit of a wall regarding new stuff.  Mostly it's because of my recurring laziness and not making myself go to the St. George Library.  With these in my hands I should have a surfeit of new material to write about.  Here's hoping.

Labels: Davis and Leng, Staten Island and It's People

Well, looks like it's all done for another four years and I can stop obsessing about things I really can't do much about and I'm pretty grateful for that.  Now I can get back to blogging about Staten Island, S&S and trying to write more.  Woo hoo!
Posted by The Wasp at Tuesday, November 06, 2012 No comments:

Fortunately, my wife and I survived Hurricane Sandy with power intact.  Though less than half a mile from the waterfront we live 186' above sea level.  If we ever flood the world's done for.

My sister-in-law, her husband and their four boys (all under 8) are at present living with us, refugees from their blacked out New Jersey home.  Around us, where power was out mostly due to the great number of downed trees, is slowly being restored.  We feel inordinately blessed and secure.  I hope and pray anyone whose suffered is able to find assistance.
So right now I'm cooking for eight, reading crime books and watching to see what we can do to help once the immediate problems (broken gas lines, downed power cables) are addressed.  I know my church has power and will be doing all it can.  I actually trust the local politicians (from Staten Island, not citywide, ie. the mayor) to work hard to ensure the borough's not forgotten in the shadows of New Jersey and Manhattan.
It's going to be be a rough time and I suspect many of the destroyed houses will not be rebuilt.  I also don't trust a mayor whose idea of an appropriate response to such devastation is to hold the NYC Marathon to do well by the borough.  As NYC is a cesspit of corruption, I also don't hold out a lot of hope for FEMA money to be spent well if the city gets it hands on it.
These look to be parlous times for my beloved Rock.  When the bridges were all closed Monday I was reminded I live on a island and can be trapped here.  Coupled with the strain on resources caused by population (and the mayor wants another million people to come here), constricted transportation corridors and crumbling infrastructure, I can really see the day coming, sooner rather than later, when pack up and leave.  I don't even know if I'll be sad on that day.
Posted by The Wasp at Friday, November 02, 2012 No comments: