As a native Staten Islander born the year after the Verrazano Bridge was opened, I grew up hearing a lot about how the Brooklyn Italians were "flooding" and "ruining" the borough.  Whatever.  I suspect that was mostly said by the people who had no idea of the deep Italian roots already on Staten Island long before the Verrazano was built.  Eh, what can you do about people?  They're going to say what they're going to say.
I'm glad this site started as the "church project" because the research I've done in that direction has been invaluable.  More than anything else it's given me a better understanding and insight into the development of the Island and the shifts in its population, native born and immigrant, over the past centuries.
One of the most interesting things I've discovered are two churches formed as Italian protestant congregations.  One, that I don't have much information or pictures of, was the Italian Pentecostal church.  All I know is that it started on Pike Street in Tompkinsville in 1923 and later moved to Richmond Road.  Today it's the Christian Pentecostal Church. 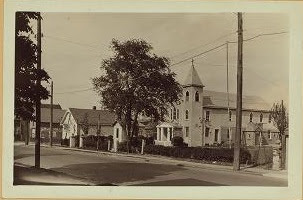 Jewett Avenue and New Street  - 1929
The other, which I have less information about, but some nice pictures of, is the Holy Redeemer Protestant Episcopal Church (Italian).  From it's name I assume it was a sort of mission outreach from Staten Island's old line (and Wasp) Episcopal churches to the Italian born immigrants.  I wonder what the thoughts that went into the decision to to that were.
Was it thought that converting the Italians to mainline Protestantism would make the immigrants better citizens?  Less Italian and therefore more American?
According to "A Brief History of the Episcopal Church" by David Lynn Holmes, Episcopalian outeach to Italians was possible because of Italian, particularly male, dissatisfaction with the Roman Catholic Church in America.  They were angry that the Church had opposed Italian unification in 1870 and they were frustrated by Irish domination of the Church in America.  Even many of the Episcopal priests were ex-Catholic priests.
I can't imagine the Episcopal Church of today, even if it was still vibrant and relevant, doing the same sort of outreach/conversion to the Hispanic immigrant population in the neighborhood.  I think they'd think the whole undertaking reeked of racism and cultural superiority.
How long were there enough converts to keep a congregation going?  Did they just merge into the existing English language congregations as they assimilated into America?  Holmes' book says that's what happened with earlier German converts to the denomination.  Like a history of Staten Island's Methodist congregations, I'd love one of the Episcopal churches.  While no one ever really answers, I'm asking for any information anyone's got. 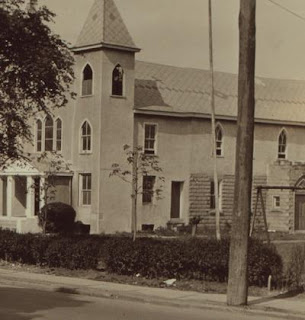 I love the swing set by the side entrance.  Today the church grounds are an auto repair lot.  That stretch of Jewett between Richmond Terrace and Castleton Avenue is one of the more scuzzy looking parts of Port Richmond. 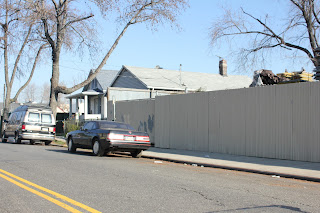