L. P. Gratacap and a house I almost bought 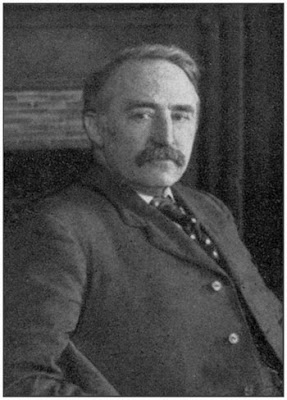 
Before I bought the glorious "Good Prospect" I now live in, I saw several other properties. All were too expensive, entailed the responsibility of being a landlord and in need of way too much repair. The only one I entertained any thought of maybe buying if I wanted to live in probably not so genteel poverty for the rest of my life was on the east side of Bement Avenue just north of Henderson Avenue.

It's a huge, beautiful 19th century home. It was divided into several units and has an amazing front lawn. Unfortunately, it also had a beautiful side yard that wasn't for sale and had already been subdivided and plans submitted to and accepted by the City's Department of Buildings. You can see the right of two homes that have been subsequently built on that lot.

The imminence of those coming houses right up along the house in question meant there was no way I was going to beggar myself in order to have neighbors looking in my kitchen. 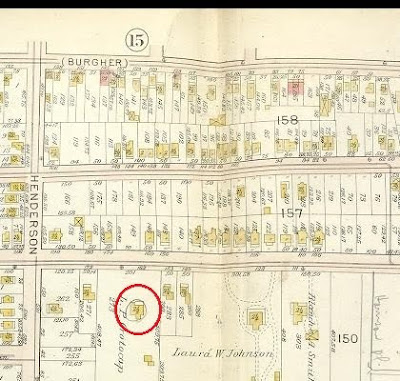 
A recent map tour showed it had belonged to one L.P. Gratacap. An odd sounding name, I immediately googled it and, quickly enough I found out who he was.

Born in Gowanus,New York, Louis P. Gatacarp was the curator of the New York Mineralogical Club and the mineralogy curator at the Museum of Natural History as well. He died, unexpectedly, in 1917 at the age of 67.

Today his once lovely house sits surrounded too closely by newer homes. Still, it stands as reminder of less crowded times on the Island.
Posted by The Wasp at Wednesday, November 24, 2010 No comments: Links to this post

The facebook group I created is called North Shore Staten Island Stuff. It's not particularly active at this point, with no one responding to any of the questions I put up and anything. Someday, though, it'll all work.
Posted by The Wasp at Sunday, November 21, 2010 No comments: Links to this post 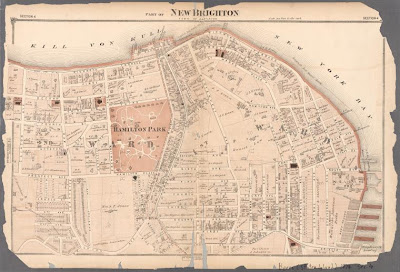 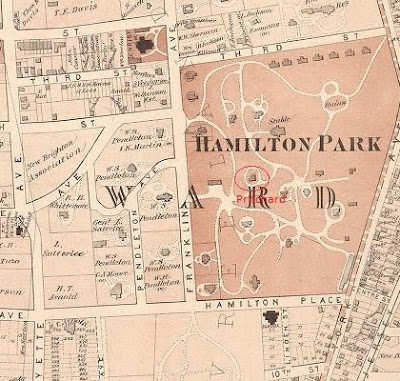 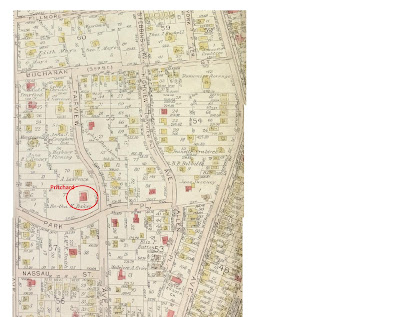 Hamilton Park - 1917 Here the Pritchard House is owned by Bertha K. Baker. The only reference I could find regarding her was her membership on the board of the Staten Island Institute of Arts and Sciences from 1907.


I've written at length in the past about Hamilton Park and shown some of the houses that stand where it once stood. Recently my ongoing excavations of the NYPL Digital Collection brought me to this beautiful 1874 map of the HP environs.

I was amazed at the difference in a mere 43 years. The open lawns and gardens of the original Hamilton Park estates and "cottages" are gone by 1917. Some of the original homes are still there (like the Pritchard House at 66 Harvard which remains even today) but their property is greatly depleted and they are coming to be surrounded by newer, smaller homes.

66 Harvard Avenue - Pritchard House - the wooded back yard on the house's west side used to be a lawn looking out over at the fields and farms of New Jersey. Today its enclosed with a giant hedge and overgrown.


The difference between 1917 and 2010 is less noticeable. The big estates were already broken up in 1917. There were new homes built, but aside from the large estate of Domenico Rorengo (no reference found) and several other larger houses on Buchanan Avenue, any tear downs aren't immediately apparent. I guess most of the cottages came down in that 1874-1917 period. 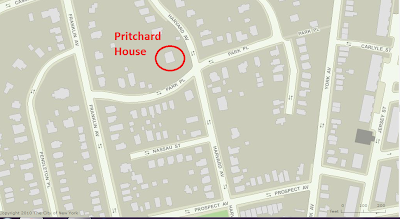 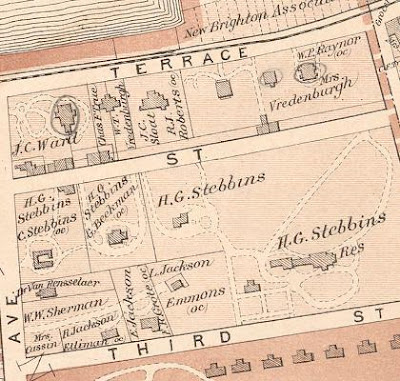 This is a closeup of the Stebbins property at the north of the Hamilton Park development property. HG Stebbins was a War Democrat, congressman and later the president of the NY Stock Exchange. His estate, which I don't presently have a picture of, was described as castlelike and crenelated. By 1917 it was all gone, as were many of the neighboring mansions to the north along Richmond Terrace.


As usual Forgotten New York has already covered the neighborhood and provided more and much better pictures than I've ever put up. Thanks for making me feel small ;)
Posted by The Wasp at Thursday, November 18, 2010 No comments: Links to this post 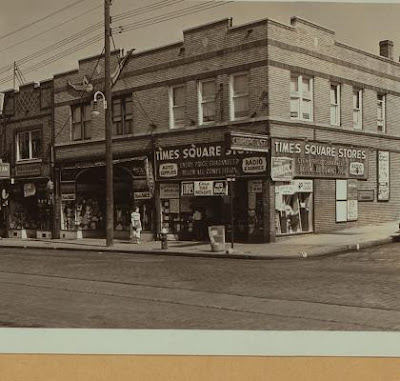 I've been working on some elaborate posts using the 1874 maps of my neighborhood and some picture scans but I'm not getting it done. So...here are some easy to slap together shots of the beautiful Port Richmond commercial and residential strip of the distant past versus its fairly rundown and sad looking present. 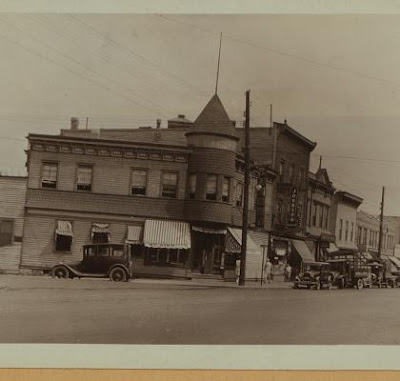 NW corner of Harrison and Richmond Avenue - 1929 - Perhaps the most iconic Port Richmond commercial image. In my youth this corner building was still in god shape. It's what still jumps to mind (alongside the Reformed Church) when I first think of Port Richmond.


Like some many other long time Islanders I grew up shopping in Port Richmond on a regular basis. since we didn't drive we'd hop onto the #3 bus in front of SI Hospital at Castleton and Cebra and get off on Richmond Avenue. There were five a dime stores, discount stores, hobby stores, clothing stores and the Luggage Shoppe. The last was one of the first stores to move off of the Richmond Avenue strip. They moved to New Dorp Lane and only closed in the past year or so. 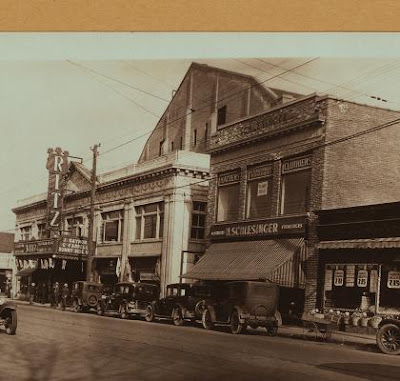 The Ritz Theater and neighboring shops - 1930 - The movie playing was "Sunny Side Up", a musical from 1929 starring Janet Gaynor.

The JC Penney's Plaza on Forest Avenue went a long way to killing Port Richmond but the Mall's advent in 1973 spelled it's final death. It lingered on for the next two decades and some of the old stores actually remain (Merlino's Photo Studio, Brownies Hobby Shop, and the oft referenced Tirone's Shoes only just closed).

But the big discount and five and dimes closed up. There was an effort by the Port Richmond LDC to encourage furniture stores to move in to the vacant stores and that helped a little but the whole neighborhood of churches, apartments and nice homes fell into a slowly, grinding disrepair. Even today, with Mexican shops replacing the old ones, the shine has never been restored to the avenue. Beautiful facades have been covered up, windows are blocked up with cheap looking advertisements and trash flutters along down the sidewalks. 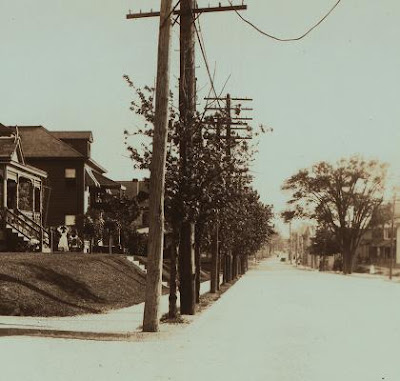 Today the beautiful home on the left corner is gone but behind trees the one to its left remains, obscured somewhat by trees.

Port Richmond was in the news a lot this past summer because of supposed racial incidents between the Mexican and black residents of the northern part of the neighborhood. While there's been longstanding tensions between the two communitiesnThe coverage in the news was woefully inadequate and often misleading.

A group called "Make the Road New York" claims the neighborhood is predominantly black and Hispanic and has an income level of around $19,000. This is only true is you restrict Port Richmond to the space between Heberton and Nicholas and Castelton and the Terrace. Most of the "racial" incidents were simple thuggery and thievery. Instead of simply addressing the straightforward law enforcement needs of the neighborhood it was turned into a circus for the likes of the Mexican consul to grandstand.
Posted by The Wasp at Thursday, November 04, 2010 2 comments: Links to this post