I've written before about what I call "the Great Collapse" of the Methodist denomination of the late sixties and early seventies. Several churches, some of them with quite long histories, closed and consolidated with other congregations. I put it down to changing demographics. The Wasp middle-class Islanders who attended these churches were fleeing to New Jersey and other distant regions. I've tried reaching out the archivist for the Methodist church, but with no luck so far. I'm going to have to give it another try if I'm going to get a better understanding of just what happened all those years ago.

In 1771, at the age of 26, Francis Asbury volunteered to bring Methodist teachings to America. He preached his first sermon in the colonies at the Methodist congregation in Woodrow, Staten Island. Eventually he became the leader of the Methodist church in America. On a regular basis, he preached on Staten Island, for over forty years. Asbury Methodist Church was founded in 1804. The present building, now home to SonRise Faith Church, was built in 1849. It has seen several major renovations over its 160+ years. Originally, it didn't have a bell tower, for example. The Advance did a short piece on it a few years back you can read here.

According to Leng and Davis, Asbury Church was founded in 1802. For decades it was the only Methodist church on the North Shore. I don't know what year Asbury disbanded and I don't know specifically which, if any, congregation it merged with. As the project progresses I'll, I hope, find out.

I don't know anything about this, other than mission churches to immigrant groups were standard for mainline denominations back in the day. Olivet Presbyterian started life as an Italian mission established by Calvary Presbyterian and I've written about the Italian Episcopalian church on Jewett Avenue. I'd guess that at some point the church closed and any remaining Italian congregants joined Summerfield Methodist Church just a few blocks up Harbor towards the Terrace. Today, it's part of Pentecostal Tabernacle

Summerfield was founded in 1839 so the Methodists of Mariner's Harbor didn't have to travel all the way to New Springville anymore. This building went up in 1869. Of all today's churches, it's the only one still a Methodist church. 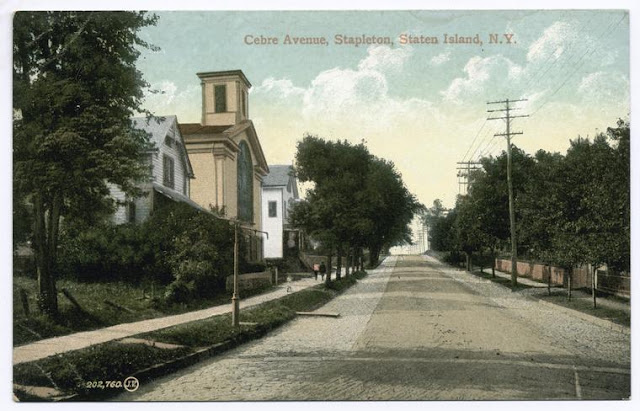 Incorporated originally as the Tompkinsville Methodist Church, this building was built in 1855. Enlarged in 1870, it became known as Kingsley Methodist. It closed in 1967. Since then it has been a private residence, a non-denominational church, and a Mormon center.

The roots of the congregation of Trinity Methodist Church went back to 1837. This beautiful church was built in 1912 after the previous building, erected in 1869, burnt down in 1909. The Methodist congregation, once huge, was disbanded in 1970, its members joining other congregations. For the next 35 years it housed Congregation Agudath Achim Anshe Chesed, which had previously been located on Jersey Street.
Sadly, this building was lost to fire in November, 2015. The Advance, once again, has a good article on the church and its history.