Big Houses on the Hills

Until about 1986, the property across the street from my family's home on Cebra Avenue was a high, tree covered hill with an old foundation and driveway hidden away in the overgrowth. Throughout my childhood ramblings across the wooded spaces of Staten Island I came across several old foundations. One was in the woods near my grandma's house on Henderson Avenue and another was several blocks from my Cebra home on Austin Place.
Going through the old survey maps on the NYPL's site I've discovered the names of the owners of these and similar houses and in some cases the names of the homes themselves. It's a great find and a fascinating look at Staten Island's old, wealthy past.

Cebra Avenue and Ward Avenue - Someone named Chester E. Clark owned the house across from mine and called it Hill Top. This map is from about 1917. By the time my family moved to Cebra in 1969 the house was long gone. Today all that remains is the man's name split into the names of two inconsequential little streets and about one hundred shoddy attached houses. 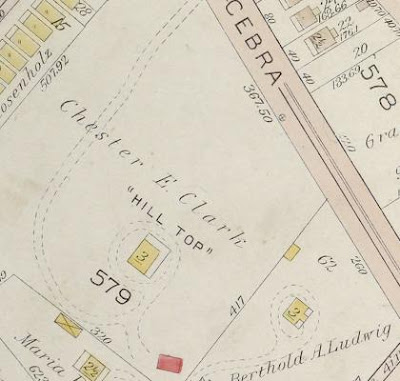 Highview Avenue and East Buchanan Street - Taking a walk with the luminous Mrs. V. one day up Highview we spotted the foundation remnants shielded from the casual passerby by the trees covering the now houseless lot. Once a man named Thomas Bushell owned it. Now it's nothing. 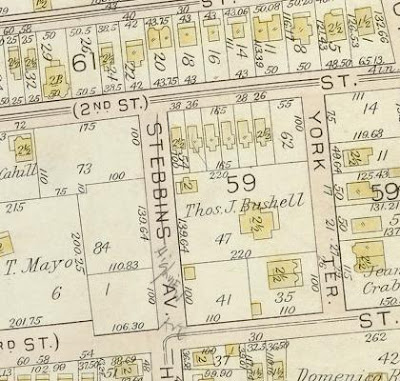 Henderson Avenue and Bard Avenue - This house was two up from my grandma's house. I remember coming across the ruins and my grandfather telling me it was from a house that'd burned down some years ago. Today I can't tell who owned it and if it even had a name. 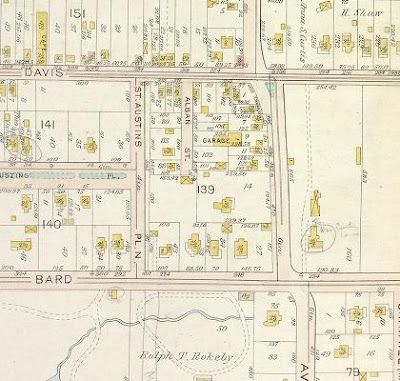 
Austin Place and Ward Avenue - This house stood on what had become a large wooded lot we hung out in all the time by time I was twelve years old. The Fredericks house was still standing, occupied by a scary old lady supposedly related to my friend Bruce N., until only a few years ago. It was finally torn down and the lot was covered with ugly attached houses and a series of plug ugly "mini mansions".

When I hung out there and played manhunt and other games, the basement of the Lederle house was still there sunk beneath the earth and covered with the old flooring. There was hole, probably from a stair case, you could climb down into. Rising up over the place the tennis courts had been once been was a great dark stone wall. The first time I saw it it was like finding a lost ruin from Middle Earth. The Austin woods were by far the most interesting "natural" place we ever found when we were kids. 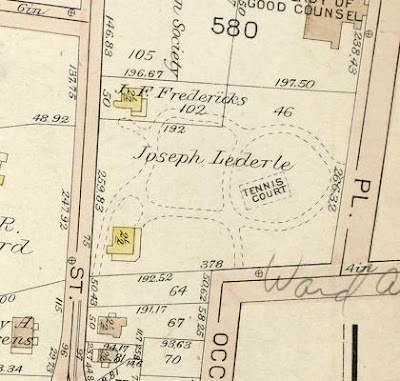 When I come across these lost houses and family names I think about how they got this way: torn down, forgotten and built over. Do these families exist anymore? Obviously they had money, but if they still exist, do they still have it? Did all these houses burn down while occupied or where they abandoned and succumbed to fire from lighting or arson? Where they simply torn down and the land sold off?
It's a sad thing to see a home that's become abandoned and forgotten. I wonder what happened there. How many games of catch were played on the lawns and hands of euchre in the drawing room? Did servants live on the grounds and were they well treated? What happened to the businesses the owners ran to make their money? I don't know and I doubt anyone else cares anymore.
Posted by The Wasp at Sunday, November 22, 2009