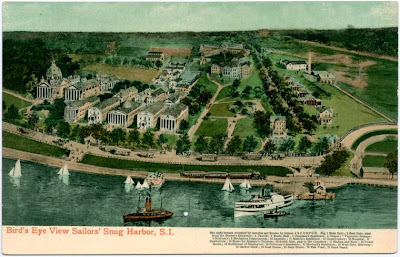 I've been thinking about Snug Harbor a bunch lately and a recent SI Advance article about artifacts coming home to Staten Island only stoked my brain-fires a little more. I've long had a love-hate relationship with the Harbor but it's really the juggernaut of Island cultural institutions and architectural wonders and at some point I guess I have to write something about the place. Even though the church and hospital are long gone Snug Harbor stands as one of the greatest collections of Greek Revival buildings in the country. There is clearly nothing else like it on Staten Island and I'd doubt anything else in the city really compares. 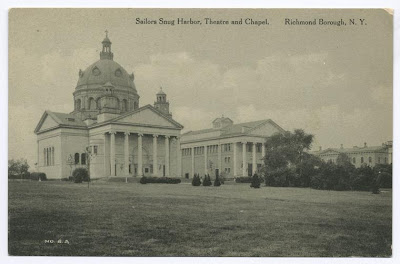 Randall Memorial Church: Built as a reduced scale replica of St. Paul's Cathedral, disrepair and no money led to its demolition in 1952


While much work still needs to be done to fully restore Snug Harbor's buildings to their original beauty, under the eyes of the most recent director (she was also the director of the SI Botanical Garden located on the Harbor's grounds for almost 2 decades), Fran X.P.Huber, much has been done. Despite the inappropriateness of Huber's Chinese and Tuscan gardens (yes, they are beautiful, no, they are not germane to the history of Snug Harbor or Staten Island. If you haven't realized that by now, that's the sort of thing that fires the engines of my blathering), she has been a generally decent steward of the Robert Randall's bequest in most other regards. 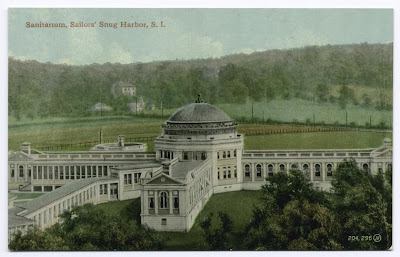 Hospital: The main building was erected in 1850 to cope with a population that was there because of disability. The wings were added in 1879 and 1898. In the "downsizing" of 1950 that saw the destruction of almost a third of the buildings it came down.

When I was little my mother told me stories about the Harbor and the Snuggies. She grew up and lived only two blocks away from the Harbor and spent a fair amount of time running around its grounds as a kid. It was clear that when the remaining residents were bundled off to North Carolina she was saddened. She, like I suspect many others, felt it was simply a ploy by the trustees to get their hands on the Harbor's 83 acres.

Snug Harbor was created out of a desire to provide for the men who'd served the merchant fleet of this nation when they'd fallen on hardtimes. From its beginnings there were issues with the trustees, money and the way the residents were treated. In the last several decades of its operation as a residential facility things got bad with the trustees looking to charge rent and develop off acres of property with stores and high rise apartments. There were court cases and all sorts of charges made.

The buildings had been designated landmarks but the trustees were still able to offer up 65 acres for development. Only aggressive community action was able to stop the construction of 2,800 apartment units and get a cash poor NYC to purchase the rest of the property. Even then, in the darkest days of the City's last great fiscal crisis, it was a not clear Snug Harbor would survive unscathed.

Over the years I watched the Snug Harbor Cultural Center misuse and make all sorts of mistakes with its patrimony. I don't think I stepped onto the grounds of Snug Harbor until I worked there in the mid-nineties. There was just nothing there that was compelling to me. 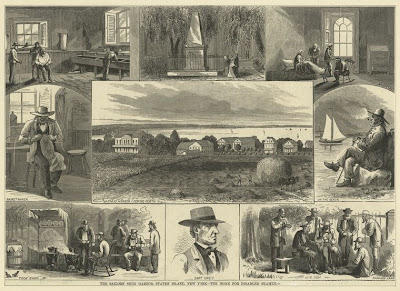 Well, there actually was, but my friends and I never acted on it. Somebody, somewhere, at sometime, told me and my friends that there tunnels under the grounds of Snug Harbor. They didn't know how to access them but they assured us it was supposed to be easy. You just had to find the right manhole cover and you'd be in. You could traverse the whole grounds of the Harbor never coming above the surface.

We actually planned out what we'd have to take in order to ensure light and not getting lost. Alas, it never went beyond the most basic of prep sessions. To this day I don't know if there actually are or aren't tunnels under the earth of Snug Harbor.

I suspect the board of directors dreamed of being a national arts destination and as such its own gallery shows focused on everything but local artists. The late Art Network came about in direct opposition to the Harbor's almost mandatory cosmopolitanism. Local organizations deemed not cultural enough (ex. the Bridge Club) were forced out even though their rent for fifteen years had helped pay the bills. The idea of Snug Harbor simply being a many faceted cultural draw for Staten Islanders seemed to be too small for the various directors.

Dreams of fixing the theater in the future displaced the need to fix the cottages so they rotted for twenty years. When they were finally fixed it was for much more than it'd have cost in the first place AND the theater remained unusable for several more years.

For most of my life there have been no reasons to go to Snug Harbor. The gallery shows have tended towards unappealing art and you can only go to the John Noble Gallery so many times. The grounds consisted of old roads, overgrown meadows and woods. 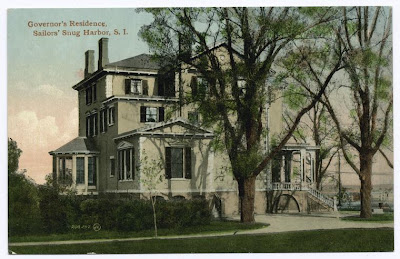 Governor's Residence: long gone it stood along Richmond Terrace to at the western corner of the property near the West Gate. Termite damage was enough of an excuse for the trustees to demolish it around 1950. 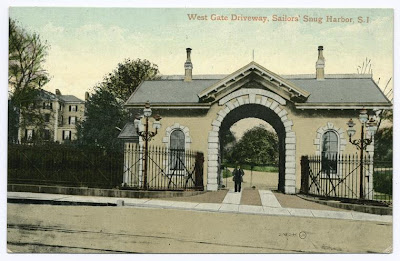 The West Gate: the governor's mansion is off to the left


In recent years this has changed. The primary draw for me are the grounds and I lay that directly at the feet of Huber. Without her I suspect the gardens and and lawns would not be where they are today which is beautiful. She restored the ponds and added various small gardens throughout the grounds. She has cared for and preserved the stands of trees lining Henderson and Kissel Avenues. I know there are those out there who don't like her, and I don't want to give undue credit to her, but, until she achieved critical mass at the Botanical Garden in the mid-nineties Snug Harbor was mostly know for the Staten Island Children's Museum and lousy catering in the great hall. Now it's actually much more. So, go, check out Snug Harbor. There are various events held on the grounds by outside groups (most recently Trinity Lutheran's first German Maifest), plays in the theaters, art shows (several years ago there was a very cool Arthur Rackham show), and above all, 83 acres of (mostly) beautiful lawns, gardens and building to wander through.

When I was little my dad and I would walk from our house on Cebra Avenue to my grandparent's on Henderson Avenue. We'd walk along Castleton Avenue, down Conyingham and Brentwood and then along Henderson alongside Snug Harbor's fenced in south side. At one point you can look down from streetlevel to a stream that runs from under the road, north towards the Kill Van Kull. There was something mysterious and wild about that running water, coming into the sun from some unknown subterranean place and hemmed in by bending trees as it flowed to the sea. I half expected to see deer drinking along its edges.

My dad and I always stopped for a moment or two, no longer, to look at the stream. Today it's got a seedy look to it. Many of the trees are gone and I know that the tunnel is just a channel for a stream the city built a road over. Still, if I look at it right and let my eyes not see the Harbor's building through the thinned out trees a little hint of the mystery comes back.

NOTE: I found a chapter from something called "Archaeology and Preservation of Gendered Landscapes" that has great information about Snug Harbor's history and social structures. It also calls out the "director of the Botanical Garden" for seeking to "incorporate more outdoor space into new attractive gardens that
have no connection to the historic landscape". Good food for thought.
Posted by The Wasp at Tuesday, June 15, 2010