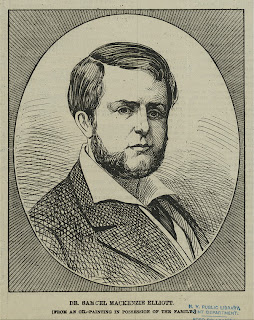 I've written a little bit about Dr. Samuel Mackenzie Elliott before.  What I've never written about ('cause I didn't realize what it was) was his home which still stands on Delafield Place opposite Walker Park.


According to the late Dorothy Valentine Smith in "Staten Island: Gateway to New York", he came here in 1836 when he bought several acres of land.  Over time he became one of the nation's preeminent oculists, attracting such prominent patients as Gen. Winfield Scott and Francis Parkman.  He also constructed between twenty and thirty beautiful homes.  Some, which I've written about, still remain, including the one next to his own large home. 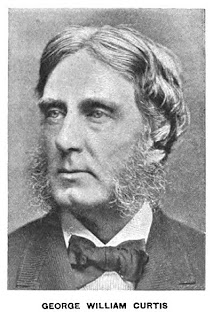 Several of his wealthy patients found themselves attracted to Staten Island's beauty and nearness to Manhattan and remained as residents.  Among these were the Shaws, known to most folks, unfortunately, only from "Glory".  Another was writer George William Curtis who famously said "God might have made a more beautiful place than Staten Island, but He never did".


These people formed the heart of the liberal, Unitarian community that made up an important part of the Island's culture in the mid to late 19th century.  The Shaws lived in a huge house that once occupied the corner of Davis Avenue and the Terrace.  Mr. Curtis' house, still standing in very good order, is at the corner of Henderson and Bard Avenues.
Doctor Elliott, while an ardent abolitionist and ally of people like the Shaws and Curtis, was no Unitarian.  On his property he built a small Episcopalian chapel and secured it a rector.  Over time it became too small for the congregation and the existing St. Mary's church was built as a replacement. 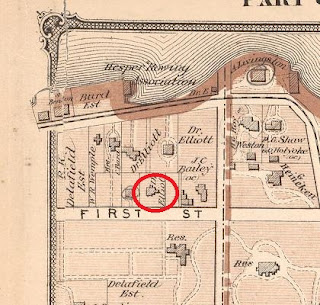 Here we see Dr. Elliot's own home on the usual 1874 map.  The property stretched down to the waterfront.  The house actually faced in that direction, its present entrance on Delafield Place being  the original rear.  One only has to see the mighty Doric columned doorway to see that.  I would love to see what the front grounds looked like in their original state. 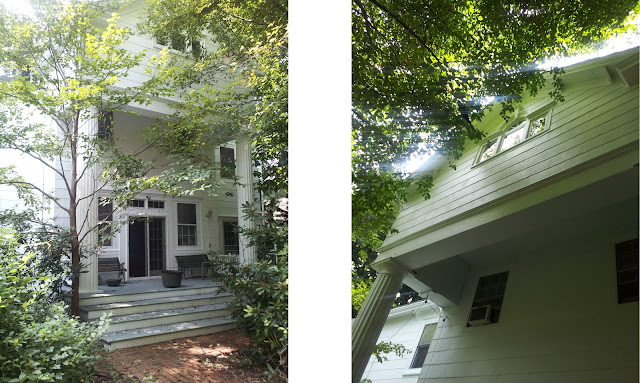 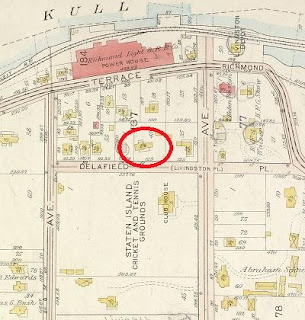 By 1917 the whole neighborhood was changed.  Part of the Delafield Estate had been given over to the Staten Island Cricket and Tennis Grounds.  The Neptune and Hesper Rowing Association's cove in the Kill van Kull the has been filled in, the railroad's been built (the old Livingston mansion turned into a station) and the Richmond Light and RR Co. built a powerhouse over it.  The big estates are starting to be broken up.

I've frequented the Livingston neighborhood for my entire life.  My mother grew up on Henderson between Davis and Bard and I spent my summers there with my grandmother.  Walker Park was place my mother took me and my sister to all the time.  I never realized the size and importance to the Island's history of this house tucked away behind tall trees and thick hedges on Delafield Place .  Only attending an estate sale there recently did I discover the great entrance hidden at its "rear".  Inside it is a great, sprawling place that must have once been afforded a stunning view of the Kull and the green shores of New Jersey.
The owners, now retired and looking to sell the house, are hoping to sell it to someone who will pamper it and maintain it as it deserves.  I hope so too.
Posted by The Wasp at Sunday, August 05, 2012

I don't know if you check or reply to this blog; but one point to note in relation to your maps. You will notice the property noted as belonging to F G Shaw in both maps. This house is still in existence on both Google and Bing maps on the corner of Richmond Terrace and Snug Harbor Rd. This would have been the site of, if not possibly, the original home of F G Shaw and his family. The Second home on the corner of Davis and Richmond Terrace would have been the home he moved into with his daughter Josephine after the loss of her brother RGS and her husband General Lowell.