So, in doing research for an upcoming post called "Banksapalooza!", I discovered a ninety year old crime in Mariner's Harbor.  That quaint little bank building pictured above was one the center of a six-hundred thousand dollar defalcation.  That's around eight million dollars in today's debased currency.
The bank, the Mariner Harbor National Bank (being called a national bank simply means it's chartered under federal regulations not state ones), was once a thriving local bank.  According to the articles I read in the New York Times, in 1921, the establishment had more than 2,000 depositors.  I don't know if that's good or bad, but it sounds like the bank was fairly substantial.
I won't go into super detail, but the head cashier (bank controller), Sylvanus Bedell, got himself involved in the machinations of a wealthy schemer.  From there he found himself making all sorts of investments, described by the Times as wildcat schemes.
Bedell's first and biggest crime involved the Johnson Shipyard Corporation of Staten Island and it's president, Robert Magruder and his son, Donald D. Magruder.  One of the furthest afield was a $10,000 investment by an Atlanta based engineering firm in order to buy the yacht Taro for deep-sea diving experiments.  They failed and the money was lost.  He also helped a florist from Staten Island invest $65,000 of the bank's money in projects that failed.
Mr. Bedell testified in 1923 that he had first gone wrong when he helped the senior Magruder convince the federal government his firm was on a firm financial standing in order to be awarded shipbuilding contracts in 1917.  Mr. Bedell said it all started when he bought ten shares in Johnson Shipbuilding and was later made treasurer of the company at $25 a week (about $425 today).  By 1920 he was being paid $200 a week (over $2,000 today).  Over time he cashed about $500,000 worth of checks of bad checks for Magruder.  Magruder claimed the firm would make good the money when the federal payments came through.  Unfortunately, a bank auditor discovered a problem.  From there it all started to come out and poor Sylvanus Bedell found himself arrested and penniless. 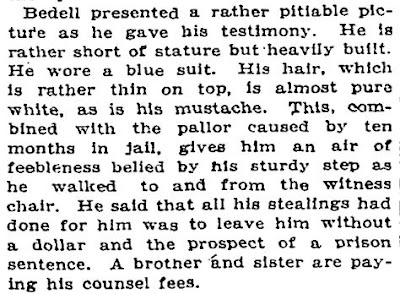