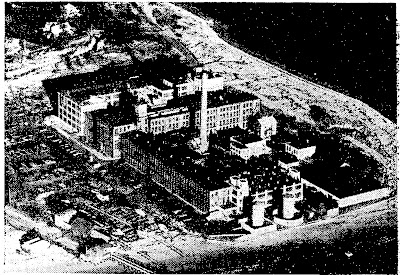 The only memory I have personally of the S.S. White Factory out on Seguine Avenue is of watching it burn while I was at a Boy Scout Olympics nearby. From our vantage point across Princes Bay we watched the brilliant red and orange column of fire rise up against the night sky. Thirty years after the event the beauty of that destructive night remains vivid.

S.S. White was a dental products company started by Dr. Samuel Stockton White of Philadelphia in the 19th century. He opened distribution sites along the East Coast and finally a large factory complex at the foot of Seguine Avenue in Princes Bay.

In 1968 the firm was bought by the Pennwalt Corporation. In 1972 they closed the factory, split its dental and industrial operations and moved them both to New Jersey.

The closed factory operated later as the Princes Bay Trade Mart. The conversion to giant flea market came about when the factory's purchaser was told he couldn't build 10 30-story apartment buildings. I know there was a performance venue on the site at some point.

Then in the late seventies it burned. Several times I think. Finally it was demolished and to this day the land remains empty despite attempts to build a huge and undesired condo complex in the late nineties.

I never would written about this if not for yesterday. The luminous Mrs. V, her mother, and I, were driving about New Jersey when suddenly we saw the S.S. White Technologies Inc. building along Rte 151. I remembered reading at some point that the firm had been moved into New Jersey and here I was faced with the actual new plant.

It was odd to come across this lost bit of Staten Island's legacy 16 miles away from where it started.
Posted by The Wasp at Tuesday, July 13, 2010