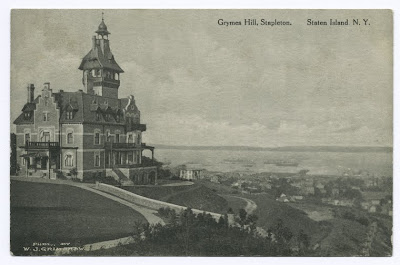 High atop a hill in Eldorado, or at least Grymes Hill, Staten Island, stood a castle. A wonderful castle built by beer and with German whimsy. For decades it towered over the brewery owned by its builder and the Stapleton homes of its owners employees.

Later it became a convent and eventually burned down. When I was young its site had become a wooded cliffside where stolen cars were dumped. I know some of the tiles from its ruins had been rescued by the Olsens, a family with their own beautiful home nearby. Today its beautiful vantage point overlooking the now decrepit Stapleton neighborhood is occupied by a series of fairly typical Staten Island mansions at the end of their own little gated private road.

CORRECTION - In the comments, someone kindly told me this did not burn. Instead, it was simply demolished.

Horrmann Castle did NOT burn down. It was demolished in the winter of 1967-68. Never had a fire in it.

I stand corrected. Thank you.

do you know who the architect was?

Not off the top of my head. I'll check out my books later for a possible answer.