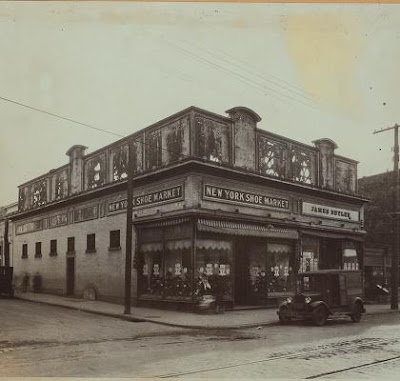 sw corner of Caroline and Castleton, c. 1927 You can see that the no longer extant fake mansard roof and gables was already decaying.

As I've written about several times previously, the site of the West Brighton Projects was once a diverse and complete district unto itself. There were movie theaters (including the first ever on Staten Island) on Castleton and Broadway. a factory filled the land now later turned into Cpl. Thompson Park. There were tenements, houses, churches, and of course stores. Decent stores, not just scuzzy delis and 99 cent stores. Tompkins Department Store was on Castleton only a few blocks from Broadway. Now, the residential heart of the area bounded by Castleton, Broadway, Henderson and Alaska has been long replaced with anthill like housing projects and the theaters are long, long gone.

The buildings that once housed the stores and theaters remain, repurposed and often run to seed. But they are still there and a little squinting can bring up images of a time most of us walking there today can't quite believe ever was.

Today's building is listed on the map as belonging to James Butler. The info tag indicates that the James Butler store in the picture is one of several.

I'm more interested in the left side of the building and the cheap, quality shoes it has on offer. 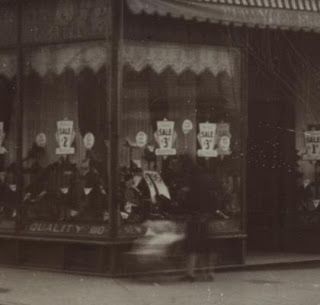 I like the image of the woman passing by and stopping and debating the quality and necessity of the shoes on display and contemplating if she's got the $2 or $3 she'd have to spend on them. 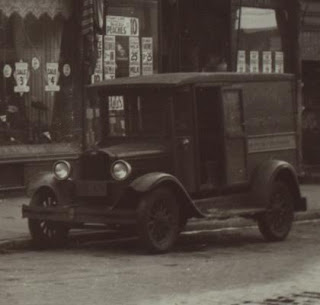 You can just make out the words on the truck's side: New York Shoe Store

The building, owned by a community group called "Heritage House", for a long time, was allowed to fall deep into decay and now sits marked with the dread boxed X indicating it's not to be saved in case of a fire.
Posted by The Wasp at Thursday, October 21, 2010