Mariners Harbor - how many times is it? 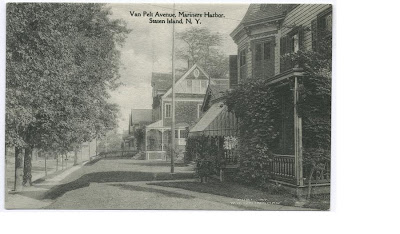 East side of Van Pelt Avenue looking north to the Terrace


View Larger MapSame view (more or less) today - much of the detail appears to have been lost to siding and painting over the decades but it still remains a beautiful house. You can see the large home in the old picture's foreground was torn down and replaced with a smaller one, probably in the 20's.


I keep coming back to Mariners Harbor because it has the greatest collection of surviving old homes (admittedly, since the rape of South Avenue in the 90's, not that many large Victorian piles, and few in perfect condition) on the North Shore. Sure, the preservationists have protected their own homes on St. Paul's and St. Mark's, but for me the real gems are the simple homes tucked away in Mariners Harbor, Stapleton and Port Richmond. These, owned by people often unable to maintain them at all, let alone to the levels demanded by the crazy landmark regulations, are in the greatest danger of being lost.


For me, these houses, some of which date to the earliest part of the 19th century, represent the real woof and warp of life during Staten Island's past. Obviously I'm a sucker for the lost manors and suburban palaces of the Golden Age's magnates, but the places where the working and middle class people lived are my greatest joys. It's much easier for me to imagine, and have some sort of historical empathy for, those families, with their worries and activities.

People like the Stokes, the Vanderbilts and the Camerons lived lives filled with servants and wielded power and wealth beyond anything I'm in regular contact with. The doctors and lawyers, the oyster captains, the clerks, the farmers and brewery workers are the people I'm most interested in. I know, was, and am related to people just like this (okay, well not any oystermen).

These are the people who lost the most with the changes wrought on Staten Island over the past fifty years. Working class neighborhoods were what were destroyed by the advent of the housing projects. The highways that would have crossed Todt and Emerson Hills were stopped but not the one that cut Concord in two. These are the people forced to deal with overcrowded roads and often poorly constructed tract housing.

So that's what interests me and motivates much of what I do here. Don't get me wrong, I do want to know what all those demolished estates looked like, but if I can find more pictures like those on display today I'll be a little bit happier.
Posted by The Wasp at Wednesday, December 29, 2010