This is the end.... The Smith Infirmary's Days Are Numbered

As promised, here's some fresh off the digital camera shots of the gradually collapsing Smith Infirmary of the original Staten Island Hospital. 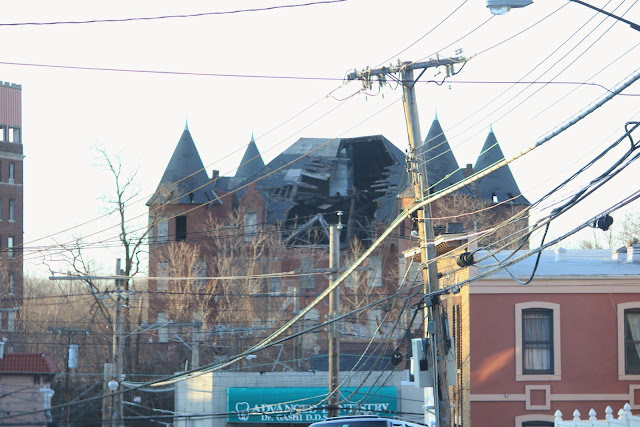 Taken from Cebra and Rosewood
This is the perspective I saw the Smith Infirmary from at least once a day for over thirty years of my life.  Closed for over thirty years, I can still picture it as an operating facility with doctors, nurses, aides and all sorts of maintenance workers.   The shops at the intersection of Victory and Cebra flourished because of the hospital.  There were Kohlmann's Florist, Matty's Barbershop, Precious Treasures Gifts, a jeweler's, a liquor store and several bars.
Over time those places went away and were replaced by decreasingly good delis, junk stores and Albanian pizzerias.  At least these days there's Dosa Garden (which I'm not sure I could actually recommend enough). 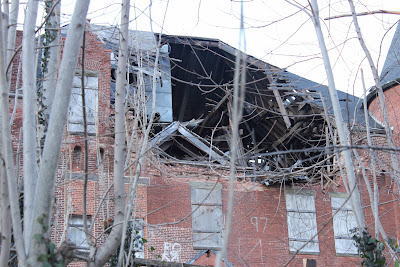 The Hole  - below, unseen, a great pile of
fallen bricks cover the ground
Brooding over it all is the crumbling hulk of the old hospital.  For years there were plans to renovate it and turn it into some sort of condo complex.  When I, in an early incarnation, worked for the city, I tried to uncover the insane web of ownership of the place for a potential investor. 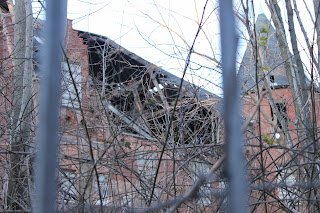 In the end, after looking at deeds, plans, transaction records and talking to the Commissioner for Finance it all came to nothing.  One man claimed to own it but, even in order to save himself millions of dollars in delinquent taxes, couldn't.
Ultimately the investor decided it was not worth dipping into the deep pool of garbage that was the old Staten Island Hospital site.  I guessed the place would just deteriorate until it got so bad that the city's office of Housing Preservation and Development (HPD) would simply take possession of the complex and bulldoze it.
The was thirteen years ago and the place was still salvageable but nothing happened.  Since then, even when the city had money, no North Shore or borough politician stepped forward to invest money to at least stabilize the place.  Then the roofs of the back buildings (where I worked on my dentistry merit badge) collapsed and HPD had to demolish them.
And it got worse and worse.  There was fake landlord who rented out units in the converted new building.  Then there were squatters.  Eventually HPD did a better job of sealing the newer buildings up for good but the infirmary and other remaining old building (I think a nursing school) just crumbled.
And now I'm proven correct.  HPD owns it and according to the Advance, they're going to raze it. 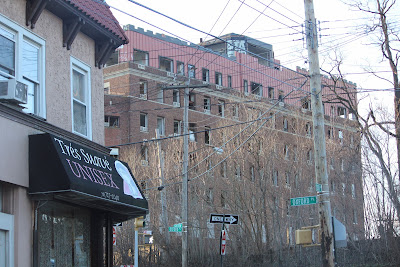 For many of the past thirty-two years this (the hospital's new building that was converted to housing, though it was allegedly a real estate scam) has looked pretty much like this.  Through five City Council Members (the only one I consider blameless is Debi Rose because by the time she got elected the damage was done), three Borough Presidents, four mayors, three State Assembly members, two Staten Senators, and six members of the House of Representatives.  Many of them were North Shore born and raised. 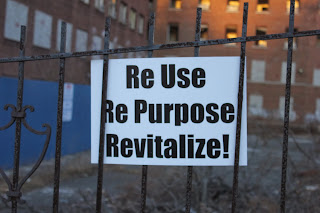