Stapleton: A Bit Of A Rant

I've bought my share of the Images of America books pertaining to Staten Island over the years.  The one about the Jewish community is particularly compelling and actually filled with useful information and amazing pictures.  I've never bothered, though to buy many more.  Instead of solid information and pictures, they, the Irish community one in particular, seem really an excuse for lots of family pictures.  I'm not saying it's a bad thing, just not something I need to spend twenty bucks on.
A few years back several neighborhood specific books came out and I got a little excited.  There are so many things I don't know about that any new information is compelling.  Unfortunately, when the Stapleton book came out (my hometown) I was pretty underwhelmed.  There are good pictures and information, don't get me wrong, but it just didn't feel well put together. 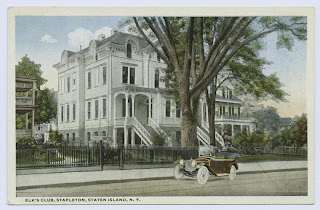 Paging through the book I was struck by the caption on a picture of the Elk's Club building on Van Duzer Street.  It said that the exact location of the building was unknown.  That surprised me.  I was always pretty sure I knew which building it was myself (simply by looking at the buildings actually on Van Duzer Street).  Still, maybe I was wrong and someday I'd have to look into it better.
Well, that day's come.  I'm in the middle of working on a post concerning Van Duzer Street, from Beach to Victory and the Elk's Club came back up.  So I drove on over with my camera and started getting some pictures. 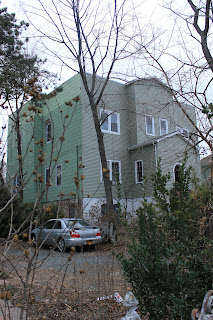 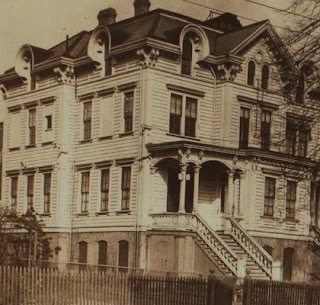 I think the pictures make it pretty clear the building of yesterday is the building of today.  Sure it's been stripped of any attractive detailing and windows have been blocked and the mansard roof has been obliterated. But it's the same building.  If you drive down the street you can still see the porch that's in the left of the postcard on the house next door.
It was hard to get a clear picture of the lowest portions of the building but if you enlarge it you can see the same same basement windows with curved tops.  There's the outcropping on the left towards the rear and the whole two stage outcropping at the front.  Pretty terrible devastation was wrought on this building but it must have been a beast to maintain. 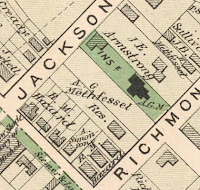 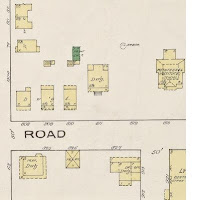 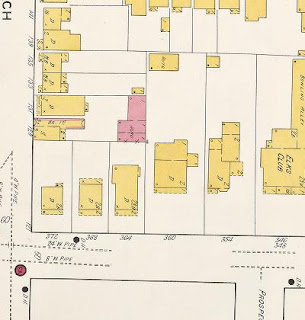 So here are the maps from 1874, 1885 and 1917.  Same building footprint (save the added bowling alley in by 1917), same location.  Not only is it listed as the Elk's Club on the 1917 map but on the two earlier maps it's designated the Methfessel Institute.  That means it's probably the first incarnation of Staten Island Academy prior to its move to Academy Place (originally Carroll Place).  I did this mostly sitting at a desk looking at easily available maps and pictures.    That's actually a very cool discovery.  The photos were really only for my own satisfaction as the maps say it all.
I'm not expert on the history and architecture of the North Shore, only a motivated amateur.  I hope I never present myself here as anything more.  Still, I hope never to steer you wrong or fail to follow down any leads I can find.  Of course I will and I hope to hear from you and be corrected as swiftly as possible.  The fluidity of a blog and the ease of correction is definitely one of its greatest assets and I hope to utilize that to the best of my ability.

PS: While working on the Van Duzer post I found myself looking at the Amazon listing for the Stapleton book to make sure I was remembering the Elk's Club picture caption correctly when I came across another serious error.  Which of course makes me wonder how many more there might be.
This one concerns a "double house" on the north side of Beach Street between Jackson and Van Duzer Streets.  According to the authors the building, looking quite picturesque in 1927, drifted off into derelict status before being demolished in the 21st century.  Here's a shot similar to one in the book but from 1931. 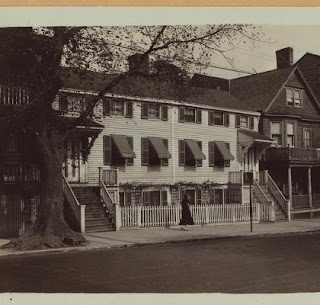 Here it is from today (sorry about the Google Maps picture, it's all I've got).  Still there, though.  I drove past it two days ago and it was STILL there.  Probably still now.


I know this sounds like I'm just griping.  At a certain level I surely am, but you know what, if you're going to put out a book take some time to go see the places you're writing about.  Look at the maps.  Get it right or leave it out.

Fletcher...maybe you'd be interested in compiling something thematic, comprehensive...more focused, scholarly and engaging that what's come down the pike. I'll bet you could get grants and plenty of press.

Thank you for the compliment, and it's a big one. I've often thought along those lines but the amount of serious lifting in would entail has always been a little offputting. Still, you have got me thinking along those lines again.