Here's the second installment of North Shore Staten Island Methodist churches. Since the previous posting, I've already learned significant new information regarding these and the previously posted churches. I've also successfully contacted the archivist for this region of United Methodist church and been directed to several major sources of information. As usual, the SI Advance has also been a good source of information. I so wish they would digitize their entire print run. There's so much valuable information in the pages of our local paper but it's difficult to extract. Maybe one day.

Dickinson Methodist started as a chapel on the property originally owned by the Decker family. When the land was sold for the construction of P.S. 3, the congregation set out to build a new house of worship. They held services in the school house for a few years, but eventually moved to a building constructed on Victory Boulevard in 1871. According to A.Y. Hubbell's History of Methodism and the Methodist Churches of Staten Island, the original chapel was sold to a Lutheran congregation.

According to this SI Advance article, Dickinson Methodist closed down and its congregation merged with Christ United Methodist in Graniteville in 1974. Today the building is owned by the non-denominational Staten Island Christian Church.

The most important thing I've learned in the past week regarding the North Shore's Methodist churches is the origin of Christ United. I put up pictures of the Italian Mission church on Harbor Road and theorized it faded away and its member shifted to Summerfield, also on Harbor Road.

The truth is very different. According to this article in the Advance, the Italian Mission was founded in 1919 by the Rev. Sante Buzzalini. In 1932 the church shown above was built from diabase rock taken from the quarry right next door (now Graniteville Quarry Park) on Forest Avenue. 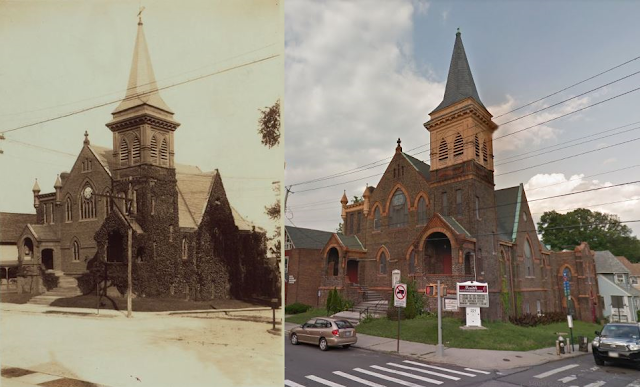 west facing and north facing sides of the steeple

Again, drawing on Leng and Davis, I learned that the congregation that built this church was originally called the North Shore Free Methodist Episcopal Church. It was organized in 1867 and built their church on this location. In 1895 it caught fire and a new church had to be built - this one.

In 1966, Methodism, facing a bit of a crisis on the North Shore, handled it by merging Kingsley, Trinity, and Grace churches. The new unified church was called Faith United. A good description of how this was done can be read here on the church's website.