To the Center of the Earth 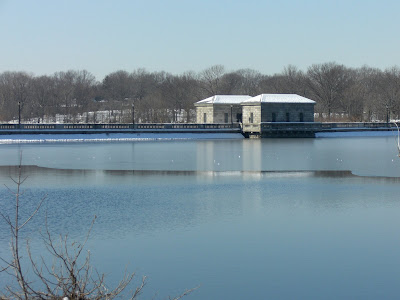 THE CAUSEWAY AT SILVER LAKE PARK

In 1980 and 1981, New York City suffered one of the greatest droughts in its history. Its reservoirs dropped to around a quarter of their capacity and Ed Koch popularized the beautifully cheesy "if it's yellow let it mellow, if it's brown flush it down". As a fourteen year old it really didn't seem to have any bearing on me whatsoever. However, it did lead to one of the coolest adventures my friends and I ever had.

For one reason or another we wandered into Silver Lake Park on our way back to my friend Alex's new house on Howard Avenue after a trek down Victory Blvd. to Luke & John's Deli for sandwiches. It was the start of summer and Alex and I had just finished our freshman years.

When we entered the park we were startled to see that the lake's level had dropped an easy six or seven feet. It was amazing. The sides of the causeway were exposed and we could see the place beyond the stone shoreline where it dropped off to the lake bottom. We had to get closer and see whatever else there was to see.

We went down to the lake and climbed the low black fence that borders it went down to the water's edge. We started walking along the shore skipping stones and looking for anything that might be considered cool. About fifty feet from the north side of the causeway on the lake's east side we found the sort of thing we hoped to find - a concrete tunnel. 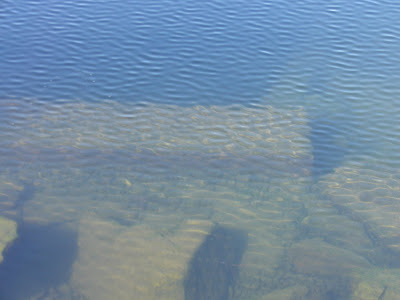 AS IT LOOKS TODAY - THE TUNNEL ENTRANCE SUBMERGED

The tunnel appeared to run eastward from the lake into the heart of the hill that rose up from the shore and to Victory Blvd. Under that hill was the actual reservoir (the lake itself is merely decorative) and who knew what else.

We ran to Alex's house and grabbed flashlights. We got back to the lake as fast as we could, switched on our lights and entered the tunnel. We didn't go that far the first day. Our lights weren't that illuminating and the tunnel seemed endless. Its ceiling was high enough for all to stand in but only wide enough for us to be comfortable if we went in single file. We walked into the hillside only far enough to know we'd need to plan more thoroughly and be better equipped.

That night we planned our big incursion into the Silver Lake tunnel. We got big dry cell battery flashlights and rope. We didn't know where we'd actually need rope but it always seemed to indicate that whatever you were doing was going to be serious. We also got markers so we could leave signs to keep from getting lost and a crowbar to break things if needed.

The next day we undertook our great expedition. There was myself, and my three friends , Alex R., Jesse B. and Jim D. We went around noon time when the sun was high and rest of the world was at work. There were some adults swimming and sunning themselves around the tunnel entrance but they clearly didn't care about what we were doing.

With a rising sense of excitement we walked into the tunnel. Now well lit, the tunnel revealed itself to be a bare, cement construction that ran in a straight line into the hillside. We walked for about ten mintues, keeping a slow pace so as not to be surprised by anything, before the we came to the stairway.

Rising up at the end of the tunnel was metal staircase with grating levels. We, of course, started walking up them.

I don't remember how many levels we climbed but memory makes it seem like a lot. Finally we came to the top of the stairs and into a concrete gallery. There were metal rungs set into the wall facing Victory Blvd. leading to a metal hatch in the gallery ceiling. Towards the lake side of the room the wall only went up to our waists. With our flashlights in hand we looked over the wall and I think we all gasped.

Like I said, the hill housed the real Silver Lake Reservoir. I have slight memories from my childhood of construction going on the park but this picture does better justice to what's under that hill than anything I can describe - - - 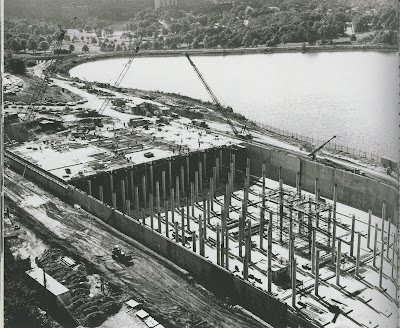 Even with our big flashlights we couldn't see to the other side of the reservoir. We were basically where the bulldozer is in the picture above. The holding tanks are vast and silent and our lights made only the slightest dent in the dark space. Moved by the scope of what we were seeing I decided to commemorate the moment by writing my D& D character's name on the wall. Today there's probably still a little chalk scratching proclaiming that "Alzhak was here".

The final stage of our inward journey was to climb the rungs. I mean if there's a ladder at the end of a journey you can't not climb it. We assumed that the ladder would bring us into the control house and we were right. 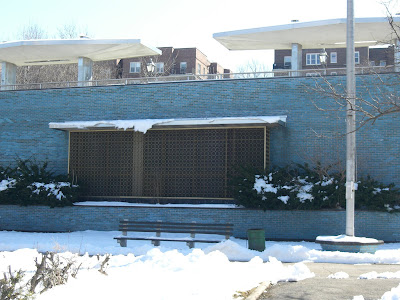 The hatch in the gallery ceiling was silver colored and lifted right up when Jim pushed it. The rest of us were right behind him. We found ourselves in a control room with panels with meters and dials. Gaguges monitoring the water level and quality hummed with quiet electrical life and little lights blinked on the consoles in seeming random sequences.

Then the alarm went off and we hightailed it out like cats with their tails on fire. I'm not sure if the alarm had anything to do with us or with problems caused by sewer work going on out on Victory Blvd. but we quite sensibly assumed it was our fault and we climbed down the ladder, flew ourselves down the stairs and hightailed it down the tunnel as fast as we could managed without killing ourselves.

When we got back out into the light the adults asked us if we saw anything cool. We told them heck, yeah.


We went back the next day hoping to repeat the previous day's undertaking and spend more time in the control room but it wasn't to be. When we got to the top of the stairs we could see that the hatch was open. Before we even climbed out into the gallery a guy stuck his head down and told us not to move. Which we did. We were out of the tunnel even faster than the day before.

We went back one more time a week later and found that the tunnel had been sealed forever. Thick metal bars had been installed in the tunnel mouth and cemented into place. We had been thwarted by the city from carrying out any new expeditions. 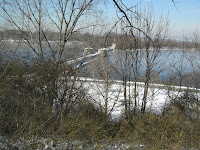