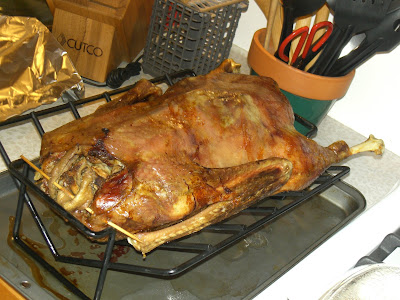 This has been the Vredenburgh family's week of poultry. The luminous Mrs. V's mother was going to come to dinner this past week for her birthday. With all the holiday cheer already permeating the air, visions of Alastair Sim floating in on the breeze from an opened door I decided to cook a goose. "Joy of Cooking" didn't make it seem too hard.

Unfortunately the geese didn't come into the butcher's (Mezzogiorno on the corner of Davis and Castleton and I can't recommend it enough) on time and I couldn't pick it up myself. Mrs. V took on the role of goose acquirer and would have to prep its poor, pink carcass. Later she told me this involved the task of severing its elegant, muscular neck without the proper tools (a great big cleaver). By the time I got home it was becoming clear to her that goose that night was not going to happen.

Properly prepared, the goose needs to be scalded in boiling water and then left to sit uncovered in the refrigerator for up to 2 days. I'm a novice in the kitchen and I want to do things right. So no goose that night.

But I'd already made the apple/sausage stuffing and my mother-in-law was still coming over. So I ran out and got a chicken, stuffed it and threw it in the oven. It was great but she settled for some leftover turkey barley soup. She had to leave before the chicken was cooked. Mrs. V and I ate it ourselves and managed several other meals off it.

Thursday, of course, was Thanksgiving and we had turkey prepared by Mrs. V's sister, Mrs. C. It was good, the sides were great and I made pies.

Finally, on Friday past, I cooked the goose. The scalding and sitting had leached much of the fat out and the three hours of cooking got rid of much of the rest. The result was more than satisfactory. There's already been several good meals off the goose with several more to come. It's a rich, dark meat with crispy skin. I don't see myself going through the process again soon (and it's pricier than I anticipated) but it was sure worth it. 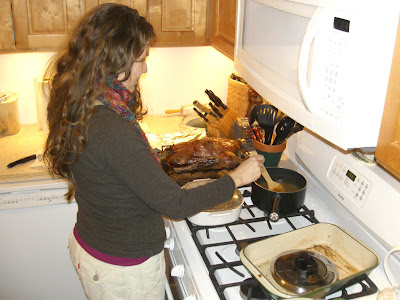